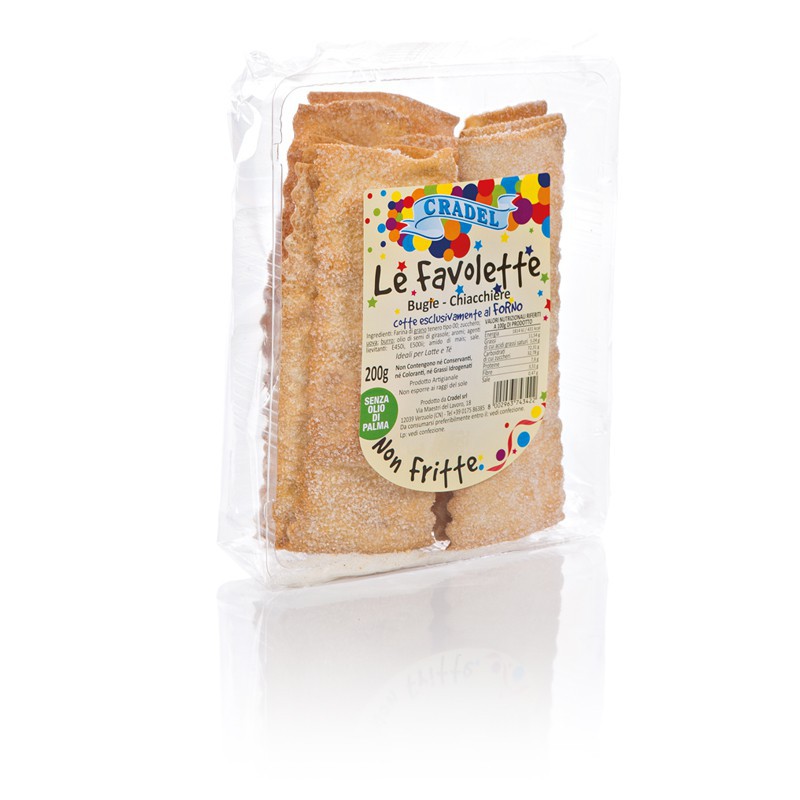 A rural and feisty taste.

Cradel “Favolette” are special baked Bugie sprinkled with inviting caster sugar. With their rural and feisty taste, “Favolette” are light and crisp. We decided not to fry Bugie in order to offer a healthy and low-fat product. Cradel “Favolette” are ideal for cheerfully spending a break. The shower of sugar sprinkling their surface makes them the favourite ones by children… but by adults too.

This time we recovered the recipe by olden time: we came back to Roman times. Bugie were eaten during the period of fights between gladiators and imperials conquests. In those times, during Roman Empire, the call them “frictilia”. The mix was based on flour and eggs. They moulded the mixture in little strips with a saw-edged rim. Then, they fried it in lard. Ancient Romans were glutton for “frictilia”. It was the dessert of their pagan parties.
Not for nothing, we eat Bugie just at the Carnival.
Since then, the recipe was slightly alterated. For many years Bugie were strictly fried. Each regional version considered different frying oils.
We from Cradel decided to offer a gourmand, but very light, variation of this sweet. We wholly bake our “Favolette”. We get golden-brown, friable and sweet-smelling Bugie . For giving our sweet a even more gourmand appearance and a rural and feisty taste, we sprinkled them with caster sugar.
For realizing “Favolette” we only employ few and simple ingredients. We don’t add preservatives, food-colouring, hydrogenated fats, neither palm oil. “Favolette” are simple and healthy.
There’s no ideal moment for savouring Cradel “Favolette”, because they’re always so good: at the end of a meal or as a snack, alone or paired with sweet wine or garnishing sauce… they will always be perfect.