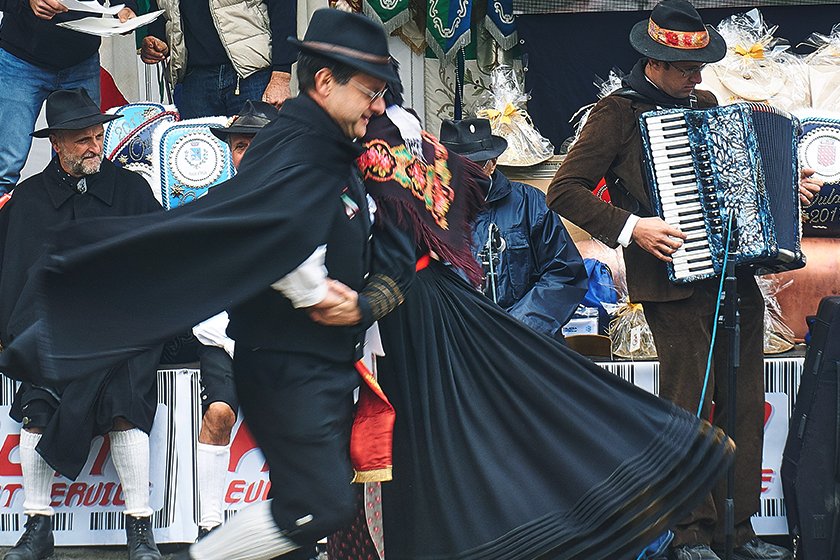 Since year 1000 we are Occitan (and on the job we speak in dialect: several of us speak Piedmontese and somebody speaks Occitan)

Around the year 1000 a new language spreads to our areas: langue d’oc, a language spoken by a proper civilization, which has never become a unitary state. It is extended from Mediterranean Sea to Atlantic Ocean, from Pyrenees to Alps, along South-France and sixteen Italian valleys: the Occitania.
Varaita Valley and Saluzzo areas are occitan lands: since 1999 they’re recognised as ethno-linguistic minorities by a specific law of Italian State. “Patois” spoken in Valleys surrounding Saluzzo remains alive and accounts for roots of this community that in late Middle Ages enjoyed a relative independence, had a tolerant culture and breathed the libertarian air of “troubadours”. Troubadours were wandering poets and bards who proposed "paratge", i.e. egalitarianism among people; it has been the first of several religious movements which increasingly departed from official Church, distant and corrupt during the dark pre-council period.
It also was time for heresies and stakes, like those which decimated Cathars in Languedoc and, centuries later, Valdes from Prali and Pellice Valley.
But in 1300 in Casteldelfino, we breathed republican air with the administrative autonomy of Escartons (five autonomy administrative centres: Casteldelfino in Varaita Valley, Oulx in Susa Valley, Pragelato Chisone Valley, Queyras and Briançon near in France) which governed themselves and whose Members were regularly reunited in order to reach agreement on administering territory, taxes and justice.
Our ancestors experienced centuries of social justice, economic prosperity and widespread literacy long before French Revolution and its egalitarian ideals.
Occitan traditions are strictly linked to that we commonly call “mountain culture”. It’s about a social and economic system based on own subsistence, where the passing of the seasons dictates even about cooking customs. We from Cradel were inspired precisely by mountain recipes. Firstly, for the selection of ingredients, such as: corn flour employed for realising our delicious “Paste di Meliga” and Corn Tart; 4-cereals flour employed as the base of cookies and fruit Mountain Tarts; spelt flour employed for realizing lovely rusks; good mountain butter, which is our secret ingredient for realizing our tasty Butter Cookies and Shortbread. We picked up several secrets from the good mountain cooking, and we used them for realizing our traditional recipes.